Restless legs is a nasty affliction now affecting nearly 10% of the U.S. population. It causes an irresistible urge to move the legs and arms and for most people, symptoms are generally worse at night.

Uncomfortable, “itchy,” “pins and needles,” or “creepy crawly” feeling in the legs are some of the main complaints reported by RLS sufferers. RLS is more common in women and it’s interesting to note that nearly half of the people with RLS also have a family member with this condition.

What is the Conventional Approach to RLS?

Medical science still has not come up with a laboratory test to officially determine RLS. Instead, patients must report their symptoms and health history until other conditions that may present similar symptoms can be excluded.

Dopamine stimulating drugs are often the route that doctors will recommend. These drugs are designed to help control the symptoms and help patients sleep, although these drugs weren’t specifically designed for RLS.

Some of these drugs have actually been shown to make symptoms worse and many lose their effectiveness over time in many patients.

If you ask your doctor about non-drug or natural approaches, they will likely put you on iron supplements. But recent findings have claimed this to be dangerous and can also lead to making issues progressively worse.

This is because the factor that really matters with iron is whether or not it is actually able to cross the blood-brain barrier.

A Growing Theory on What Causes RLS

As stated earlier, the standard protocol for most of those doctors who have heard of RLS is to test your iron levels. Now iron is absolutely a necessary requirement for so many functions of the body, especially for RLS sufferers.

So this isn’t a bad idea.

The problem is, that the test that is usually done only tests for the amount of iron in the blood. And herein lies the problem.

“The body’s iron levels are probably fine. But iron metabolism most likely isn’t…”

Here’s a little secret that some doctors won’t tell you.

Once test results come in there are only 2 directions they will take. And both lead you in the wrong direction.

If the test results show low iron levels in the blood, you are put on an iron supplement to try to correct the problem. If they show normal, or even close to normal, you are given one drug after another in hopes that one will work for a while, as a temporary “band-aide.”

But they are missing the most important fact…

RLS has nothing to do with the amount of iron in your blood. But it has everything to do with low iron levels in your brain. In particular, the substantia nigra region of the brain, which is where the dopamine regulating center is.

An experiment1 done in 2011, autopsied the brains of 14 RLS sufferers and indicated that the part of the brain that is directly related to dopamine regulation – the substantia nigra – consistently reflected low levels of iron storage in these RLS sufferers.

It’s not a matter how of much iron you have in your blood in fact, it can make your RLS symptoms worse or even fatally toxic to take too much iron. And a recent study2 revealed that only 1 in 5 RLS sufferers were actually iron deficient.

Rather, RLS is caused by problems with iron transportation and delivery to the brain. What experts have just recently discovered is that it really comes down to how much iron is able to cross the blood-brain barrier and into your brain where it can be properly utilized.

This is because iron is the most crucial element for the proper functioning of dopamine neurotransmitters.

Research tells us that deficiencies, imbalances and malfunctioning of neurotransmitters is at the root of many of common health conditions.

Because when neurotransmitters are not functioning properly, then the mind and body cannot communicate effectively, resulting in the myriad of chronic neurological conditions.

Logically, the most important question now becomes, how can we get these neurotransmitters to function normally again? 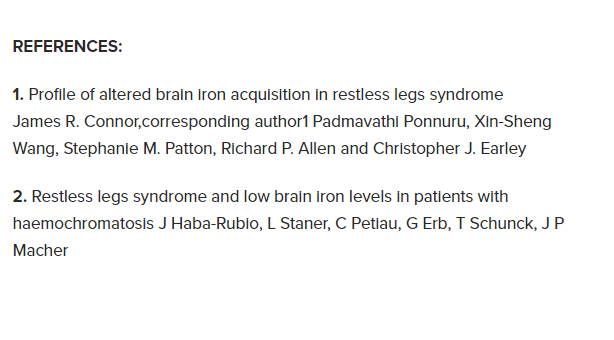